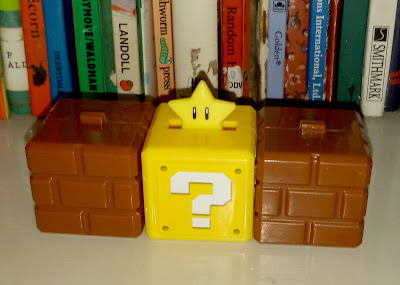 Did you know?
Blocks are a staple of many platformers and RPGs in the Mario franchise. In fact, they were so successful that blocks are now a great part of the platforming genre for most video game series. Blocks often release coins and items (particularly power-ups) when hit from below or ground pounded from above. Blocks are also commonly used as a platform to get to places, but some, such as the Drop Block, may have negative side-effects when stepped on, making it difficult to traverse them. Blocks have many other uses: they can grow, shrink, recover health, give the player tips or change the level to benefit or harm the player in some way. Some blocks will break when hit, but most will simply become inactive Empty Blocks.
Posted by Percy at 4:25 PM No comments: