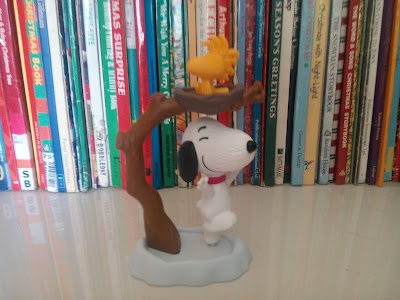 Snoopy began befriending birds way back in the early 1960s. When Snoopy started using his doghouse for various purposes: a rest stop during migrations, a nesting site, a community hall, or a place to play cards. One of these birds named, Woodstock, attached himself to Snoopy and assumed the role of Snoopy's sidekick and assistant. It was in April 4, 1967, Peanuts daily comic strip, started featuring a single bird flew in after a long flight while Snoopy was lying on top of his dog house. He chose Snoopy's nose as a good place to rest, and Snoopy uncharacteristically accepted this intrusion. Over the next two days, Charles Schulz began to establish character traits for Snoopy's new friend by revealing that he could talk (more accurately that he could complain, in the form of repetitive sounds in word form—"gripe, gripe, gripe, gripe", "complain, complain, ..."), that, unlike normal birds, he didn't like to fly south every winter, and that his flying skills were not quite up to snuff. By the end of this four-strip sequence, Snoopy, in character as the World War I Flying Ace, learns that the bird is his new mechanic — Woodstock's first supporting role.
Posted by Percy at 11:27 PM