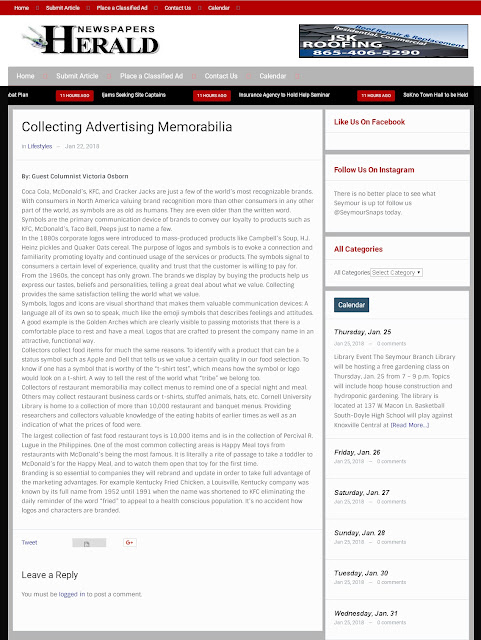 in Lifestyles — Jan 22, 2018
By: Guest Columnist Victoria Osborn
Coca Cola, McDonald’s, KFC, and Cracker Jacks are just a few of the world’s most recognizable brands. With consumers in North America valuing brand recognition more than other consumers in any other part of the world, as symbols are as old as humans. They are even older than the written word. Symbols are the primary communication device of brands to convey our loyalty to products such as KFC, McDonald’s, Taco Bell, Peeps just to name a few.
In the 1880s corporate logos were introduced to mass-produced products like Campbell’s Soup, H.J. Heinz pickles and Quaker Oats cereal. The purpose of logos and symbols is to evoke a connection and familiarity promoting loyalty and continued usage of the services or products. The symbols signal to consumers a certain level of experience, quality and trust that the customer is willing to pay for.
From the 1960s, the concept has only grown. The brands we display by buying the products help us express our tastes, beliefs and personalities, telling a great deal about what we value. Collecting provides the same satisfaction telling the world what we value.
Symbols, logos and icons are visual shorthand that makes them valuable communication devices: A language all of its own so to speak, much like the emoji symbols that describes feelings and attitudes. A good example is the Golden Arches which are clearly visible to passing motorists that there is a comfortable place to rest and have a meal. Logos that are crafted to present the company name in an attractive, functional way.
Collectors collect food items for much the same reasons. To identify with a product that can be a status symbol such as Apple and Dell that tells us we value a certain quality in our food selection. To know if one has a symbol that is worthy of the “t-shirt test”, which means how the symbol or logo would look on a t-shirt. A way to tell the rest of the world what “tribe” we belong too.
Collectors of restaurant memorabilia may collect menus to remind one of a special night and meal. Others may collect restaurant business cards or t-shirts, stuffed animals, hats, etc. Cornell University Library is home to a collection of more than 10,000 restaurant and banquet menus. Providing researchers and collectors valuable knowledge of the eating habits of earlier times as well as an indication of what the prices of food were.
The largest collection of fast food restaurant toys is 10,000 items and is in the collection of Percival R. Lugue in the Philippines. One of the most common collecting areas is Happy Meal toys from restaurants with McDonald’s being the most famous. It is literally a rite of passage to take a toddler to McDonald’s for the Happy Meal, and to watch them open that toy for the first time.
Branding is so essential to companies they will rebrand and update in order to take full advantage of the marketing advantages. For example Kentucky Fried Chicken, a Louisville, Kentucky company was known by its full name from 1952 until 1991 when the name was shortened to KFC eliminating the daily reminder of the word “fried” to appeal to a health conscious population. It’s no accident how logos and characters are branded.
Posted by Percy at 5:19 PM