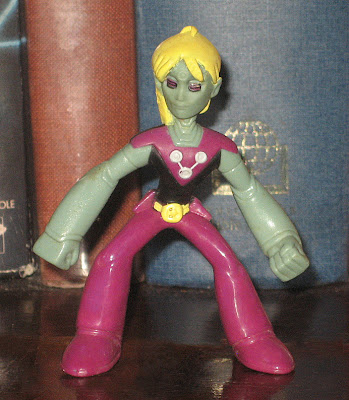 Brainiac 5 possesses a twelfth level intellect which grants him superhuman calculation skills, amazing memory and exceptional technical knowledge. By comparison, 20th century Earth as a whole constitutes a sixth level intellect, and most of his fellow Coluans have an eighth level intellect. 31st century Earth as a whole is a ninth level intellect. His incredible memory allows him to retain knowledge of events that all other characters forget such as the first meeting of the three different Legions.[22] The post-Zero Hour version of Brainiac 5 was shown in several issues to be able to ponder twelve lines of thought simultaneously.[citation needed] When a renegade Titanian read his mind, she discovered that his subconscious — usually the more active and chaotic part of the mind — was less active than his twelve simultaneous conscious thoughts. Whether any other version of Brainiac also exhibits this trait remains to be seen
Posted by Percy at 9:42 AM