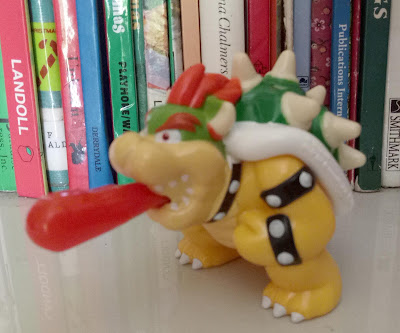 Bowser, sometimes known as King Koopa, is a major character and the main antagonist of Nintendo's Mario franchise. He is the leader and most powerful of the Koopas, an evil-driven race of turtle-like creatures, and has been the archenemy of Mario, and to a small extent, Luigi, ever since his debut in Super Mario Bros. He has repeatedly kidnapped or attempted to kidnap Princess Peach with the ultimate goal of defeating Mario and taking over the Mushroom Kingdom, though he has also attempted to conquer various other realms and even the entire universe. Despite his villainous nature, he has occasionally helped Mario and other heroes against common threats and participates with them in their numerous sporting events in spin-off games.
Posted by Percy at 4:22 PM No comments: