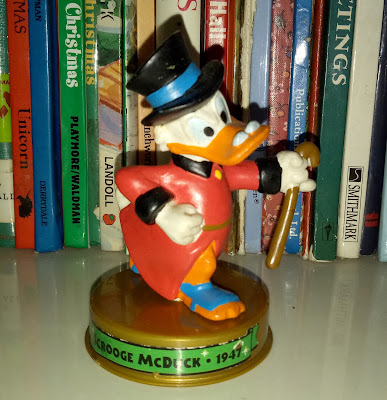 Mickey's Christmas Carol is a 1983 American animated featurette produced by Walt Disney Productions and released by Buena Vista Distribution. It was directed and produced by Burny Mattinson. The cartoon is an adaptation of Charles Dickens' A Christmas Carol, starring Scrooge McDuck as Ebenezer Scrooge. Many other Disney characters, primarily from the Mickey Mouse universe, Robin Hood, and The Adventures of Ichabod and Mr. Toad, were cast throughout the film. Mickey's Christmas Carol was largely an animated adaptation of a Disneyland Records 1974 audio musical entitled An Adaptation of Dickens' Christmas Carol. The musical featured similar dialogue and cast of characters with the exception of the first and last Christmas ghosts.
Posted by Percy at 4:32 PM No comments: