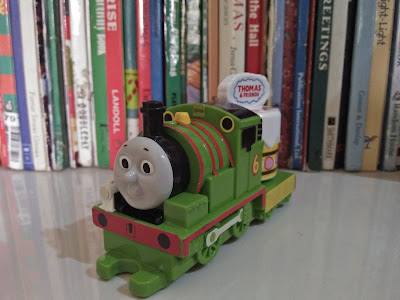 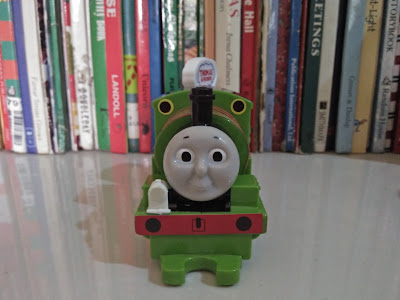 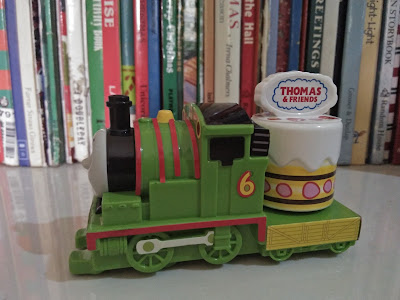 
Percy is the No. 6 green engine. He is the junior member of Sir Topham Hatt’s railway. Simple Percy is quite content puffing around the yard with no particular desire for adventure in the world outside. Percy is Thomas' best friend and his favorite job is delivering the mail. He is always happy to help and other engines sometimes take advantage of his good nature. Percy is based on 0-4-0 saddle tank engine based on engines from the Avonside Engine Company...or was he based on a green caterpillar with red stripes?

Percy was the source of much friction between Rev. W. Awdry and C. Reginald Dalby, the first illustrator of The Railway Series. Awdry complained that Percy did not look like a real locomotive, an issue that had caused contention between the two men on several occasions and concerning several characters. In the case of Percy, it was particularly infuriating, as Awdry had built a model of the engine in order that the artist could use it as a reference.

All this came to a head when the book Percy the Small Engine, centering on the eponymous character, was written. Awdry wrote to Dalby a letter requesting that he should make Percy look less like "a green caterpillar with red stripes". The sentence was this: "I beg, pray, and exhort you not to make Percy look like a green caterpillar with red stripes!" Insulted by this, Dalby resigned from the Railway Series.

Subsequent illustrators modified the design to make Percy look more like a typical industrial locomotive. The television series, however, utilized the original design.

The phrase "a green caterpillar with red stripes" resurfaces in the later story 'Woolly Bear', in which Thomas uses it as an insult to Percy and amends were made between Awdry and Dalby.
Posted by Percy at 5:26 PM No comments: