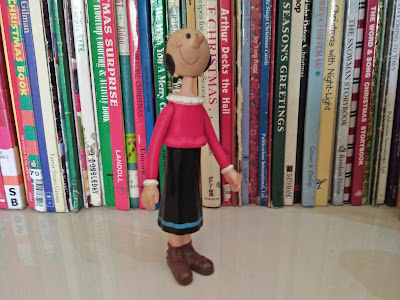 In the strip as written by Segar, Olive was something of a coy flapper whose extremely thin build lent itself well to the fashions of the time; her long black hair was usually rolled in a neat bun, like her mother's. She is the youngest sibling of Castor Oyl. She was the more-or-less fiancée of Harold Hamgravy, a "lounge lizard" or slacker type who did as little work as possible and was always borrowing money. His attraction to other women—particularly if they were rich—naturally incensed Olive, and she once succumbed to a fit of "lunaphobia" (a kind of angry madness) over one of his amours. (When she recovered, she continued to pretend to have the disorder to win him back.) She was not immune to flattery from other men, but remained committed to Ham until Popeye's appearance. Olive and Popeye actually hated each other when they first met (her first words to him were "Take your hooks offa me or I'll lay ya in a scupper"); they fought bitterly—and hilariously—for weeks until finally realizing that they had feelings for each other. The version of Olive Oyl most widely familiar is the version from the theatrical animated cartoons created by Fleischer Studios and continued by Famous Studios. Unlike most modern damsels in distress, Olive Oyl is tall and skinny, with tightly wound hair and enormous feet (the latter sometimes used to comedic effect). Popeye's comment about her measurements is that she is a perfect 57... 19-19-19.
Posted by Percy at 5:17 PM No comments: